A lot of writing this week for my MMP 240 class. After being asked to state my opinion on the use of font units in CSS, I had to do some research and paint a picture of the mobile internet landscape.

First of all, if we talk about “mobile internet” we talk about 3G and 4G phones. Depending on which place of the world we are, numbers on the market penetration of smart phones can vary: Japan has always been a leader in this area, followed by Europe, USA and in developing and/or economically depressed areas (Middle East, Africa, parts of Asia, Eastern Europe and South America). A study from January 2014 states that “In the US 58% of American adults have a smartphone and 42% of American adults own a tablet computer”. Yet, everything shows that these trends are going to keep growing.

In the past, mobile internet users were surfing the web in search of basic information. Today, with the avalanches of apps invading the market, it looks like mobile users are more active online. They purchase, they update their socials, they check their GPS, they play video games…. In another study published in 2010 by Mashable, some stats were predicting that by 2015 “Mobile Web Will Rule”. Yet, in the eve of 2015, it looks like they were right. 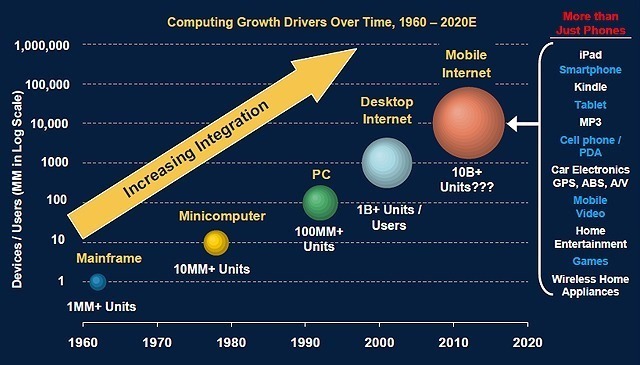 However, maybe we can question if it is not the device itself that will change the rule of the game. With such companies like Apple and Google always looking for innovations, maybe users end up using watches or glasses to surf the web.

Screens sizes will increase and enhance the user experience. The tendency is now to larger screens, faster connection and content sharing as the last Adobe Report explains.

It is not surprising that Apple launched last week its brand new iPhone 6+ with a 5.5 in screen.

A new headache for designers? Maybe. But one thing is sure: these new “Phablets” are changing the market: a year ago, browsing from tablets surpassed smartphones, but today, this trend seems to decrease according to this article.

I bought an iPad mini a year ago and I am not ready to give up on it. In my opinion, prices of 3G and 4G carriers are still too expensive. I use my phone (which is not smart phone) only for phone calls and use Free WIFI to browse the Internet with my iPod Touch and iPad mini.

What about you? How do you use your mobile for browsing the Internet?